Quick Rundown On The Five US Military Service Academies

Home » Quick Rundown On The Five US Military Service Academies

Military academies offer a top-notch college education without the debt from student loans. They also provide you with life skills for future career paths with a rigorous education where you’ll leave with an undergraduate degree. 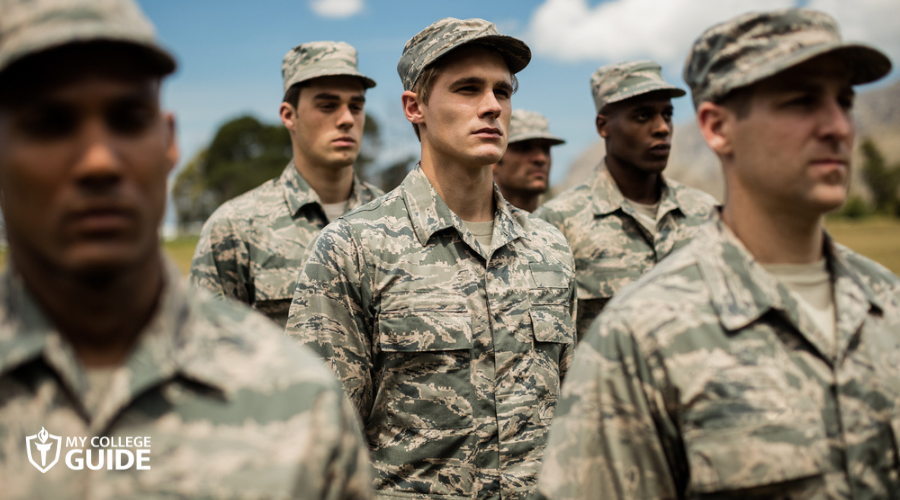 Keep in mind that most military service academies require a 5-year service commitment after graduation. After your commitment, you will be able to join the workforce within your branch of the U.S. military or follow your career path out of the service.

If you’re looking for a productive way to earn an education but also serve your country, researching military service academies may be a great option for you. However, as an option, there are military friendly online colleges, as well as on-campus ones, that you may be interested in.

What Are the Military Academies?

The U.S. has 5 military academies, each of which provides an undergraduate education along with physical skills to help you succeed in the Armed Forces.

The 5 military academies are:

You can review each military academy to see which one is a good fit for your future goals.

Location: Colorado Springs, Colo.
Application Stats: About 11,687 applications of which about 12% were accepted and of those about 75% enrolled (2021-2022)
Diversity: Women-29%; Minorities-36%
Service Commitment: At least 5 years once earning their commission

According to data obtained from the National Center for Education Statistics and the United States Air Force Academy, approximately half of Academy graduates choose flight training and serve in approximately 15 flying-related careers such as pilots combat systems officers, or air battle managers.

Depending on the major chosen, you can expect to study engineering, business administration, biology, general studies, or even legal studies.

Location:West Point, N.Y.
Application Stats: About 13,955 applicants of which 11% were offered admission and of those, 81% enrolled
Diversity: Women-24%; Minorities-38%
Service Commitment: A minimum of 5 years on active duty then 3 of inactive duty

To foster your leadership skills and responsibilities, it is recommended that you participate in some extra-curricular activities during high school. The admissions team places some consideration on the value of achieving distinction in a particular activity than participating in multiple activities without any evidence of leadership achievement.

According to admissions data from the National Center for Education Statistics, you have over 1,000 courses to choose from when attending the US Military Academy including social sciences, chemistry, mathematics, and military applied science.

Location: Annapolis, Md.
Application Stats: About 16,265 applications of which 8% were accepted and of those 86% enrolled
Diversity: Women-29%; Minorities-40%
Service Commitment: A minimum of 5 years as an officer in the Navy or Marine Corps

The Naval Academy offers 24 majors in the fields of engineering and weapons math and science and humanities. It is helpful for high school students to take engineering and computer courses to prepare for the rigors of the Academy’s core requirements.

You can choose to study various programs like engineering, history, and military technologies among many more. According to the National Center for Admissions Statistics and the United States Naval Academy Undergraduate Admissions Office, the Naval Academy receives more than 16,000 applications per year with between 5 and 10% being accepted, and out of that percentage around 80-90% enroll in the program.

According to data from the National Center for Admissions Statistics, when attending the US Naval Academy, approximately 30 percent of cadets graduate with some form of engineering degree.

The US Coast Guard also offers support to all cadets while enrolled with academic services, but also once cadets have graduated with career counseling. This can help you potentially learn of opportunities where you can use your degree after your service is completed.

Location: Kings Point, N.Y.
Application Stats: 1850 applicants of which 411 were offered appointments and of those 279 plebe candidates reported in
Diversity: Women represent 13.2%; Minorities represent 19.7%
Service Commitment: Either 5 years in any of the nation’s armed services or working as a merchant marine officer in the maritime industry. Those who choose the latter must also serve eight years in any branch of the reserves.

All admissions data has been sourced from the U.S. Merchant Marine Academy class profile. As for what the academies look for in an applicant the essentials include good grades, good test scores, leadership skills, physical fitness, community service, and a desire to serve your country. The academies also offer summer programs that can help you prepare for your application to the program.

The 5 military academies offer a variety of majors that can train students for diverse careers in the armed forces and beyond.

For example, many students at the Air Force Academy become pilots. That’s a job you could do in the military, or you could later use your training for a civilian flying career. At the Naval Academy, some students study naval architecture and marine engineering. They learn to build and work on all sorts of watercraft.

As you prepare for military service, you might want a degree program that addresses global matters. Economics and political science are possibilities. With those degrees, you might work in operations research, policy analysis, or finance. Some academies have extensive foreign language programs. Becoming fluent in another language could lead to a career as an interpreter or a translator.

According to the U.S. Bureau of Labor Statistics, military pay varies based on your rank and how long you’ve been in the service. Some military roles are entitled to additional compensation. Some of the jobs that you could train for at a military academy are listed below.

The military pay for these careers may differ from the national average. After graduation, you’ll be committed to a period of military service. Once you’ve completed it, you could choose to continue your military career or transfer your training and experience into a civilian role.

How to Choose the Right Service Academy for You

The United States has five military academies. They are the US Air Force Academy (USAFA), the US Military Academy (USMA), the US Naval Academy (USNA), the US Coast Guard Academy (USCGA), and the US Merchant Marine Academy (USMMA). The USMA is often referred to as West Point.

If you’re interested in a service college, you’ll have to consider which of these is best for you.

Visiting campuses may help you decide which army or navy academies are best for you. You might want to consider summer programs for high schoolers to help you learn more about the schools.

Military universities are quite selective and have strict admissions requirements. Your application packet for one of these schools may need to include:

You may also need to complete an interview and write a personal statement. In addition, you will need to verify that you meet certain criteria, such as being an unmarried US citizen with no dependents.

Attending United States military academies is different than going to other colleges. Unlike other schools that require students to fill out the Free Application for Federal Student Aid (FAFSA), these institutions are funded by the federal government. That means that students’ educations are paid for.

You may even receive a monthly stipend. Plus, you’ll have access to various benefits that other military members receive, such as discounts and the use of commissaries. Even still, schools may charge an initial fee or a monthly fee. This covers various items, such as uniforms and on-campus services.

You may be able to use outside scholarships to help pay for those costs. Scholarships are often given by organizations like community clubs and philanthropic groups.

What Do You Do in Military School?

If you enroll in military school, you should expect a more structured, disciplined environment than you’d have at a regular college. The curriculum and your daily activities will build your military readiness, your character, and your academic abilities.

You’ll go through Basic Training when you first get to military school. During that experience and beyond, you can expect your years in school to be rigorous for both your mind and your body. Over the years, you’ll be granted increased privileges and responsibilities. Toward the end of your program, you’ll be serving in leadership roles. You will also start applying for jobs within the military.

Is There a Marine Academy?

No, there’s not a Marine Academy in the same way that there’s an Air Force Academy, per se. If you want to enroll in a military college with the intent of joining the Marines, then the Naval Academy is the school for you. USNA graduates can apply to enlist with the Navy or the Marine Corps.

There’s also the Merchant Marine Academy, a small military college that trains Mariners. That’s different from the Marine Corps. Graduates can apply to any branch of service, but the most common appointment is as a member of the Navy Reserves.

What’s the Difference Between Military Schools vs. Traditional Civilian Colleges?

Going to army colleges isn’t the same as going to regular universities.

At either type of school, you’ll be able to choose a major and work toward your career goals.

Getting Into a Military Service Academy

Getting into army universities and other military colleges is a rigorous process. To pursue this type of education, start early and present the strongest application that you can. It’s critical to show that you’re a physically fit person with a sharp mind.

If you’re up for the challenge, military universities can provide an incredible education that opens up many opportunities. You will graduate ready to serve your country as a military leader, and you’ll have in-demand skills that can transfer to civilian employment as well.

Take the first step toward a military education by checking out the options for armed forces colleges.

Elizabeth is pursuing a Doctor of Philosophy in Foreign Policy and earned her master's degree in business administration. For her undergraduate studies, she earned a Bachelor of Arts in Business Administration with a concentration in international business. Elizabeth's research is focused on universities offering online degree programs.